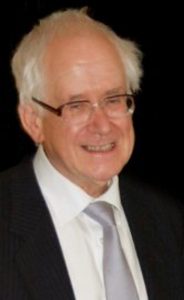 It is with a heavy heart that we must inform our members of the sad news that Sandy Murray, Secretary of the Psychologists Protection Society and servant to our PPS members for 40 years, passed away peacefully after a short illness on Sunday 3rd August at Forth Valley Royal Hospital, Larbert.

The Psychologists Protection Society was formed in 1974 out of an indemnity scheme operated by the British Psychological Society. Sandy, a Clinical Psychologist himself, took over the scheme and created a new organisation, inviting his fellow professionals to join him. Following a member falling foul of not having taken out an add-on to her insurance policy which granted legal expenses, Sandy created a discretionary fund which could be used to help fellow professionals when they fell into difficulties. Over the years, the Psychologists Protection Society admitted professionals from new and emerging disciplines including play therapy, counselling, drama therapy etc. Initially only open to members resident in the United Kingdom, PPS began to accept members from the Republic of Ireland and elsewhere in Europe. Under Sandy’s careful stewardship the Society grew from 200 members in 1974 to over 5300 in 2014. Sandy made himself available to members 24/7 providing practical, sensible, in-depth advice to those in difficulties in a sympathetic and caring manner. If a member required at phone call at 6 o’clock in the morning, Sandy was ready and waiting. If a member needed to chat face to face, Sandy was on the next train. A few PPS members have enquired as to why their PPS membership started on Christmas Day, such was Sandy’s commitment to his fellow professionals!

“I am deeply saddened by the news of Sandy’s death at a personal level and I know many others will feel the same. I feel bereft that a man with such experience, insight, compassion and humour has died. He brought help and reassurance to many people and for lots of people he was a port in a storm….”

Born in Dundee, Scotland in 1938, Sandy spent the majority of his childhood years in Shrewsbury, England. Sandy initially studied chemistry and maths at the University of Manchester in the late 1950s, but switched to studying psychology after completing an introductory course as part of his Chemistry studies. He then studied for a Diploma in Clinical Psychology at the University of Glasgow and was in the first year ever of Clinical Psychology graduates in Scotland. He initially worked in NHS hospital settings including the Southern General Hospital in Glasgow, State Hospital at Carstairs and Bellsdyke Hospital in Larbert. In the 1980s he started his own private practice in Fife and Perth and was amongst the first wave of clinical psychologists in the UK to establish an exclusively private practice. Sandy retired from private practice in the early 90s, spending his latter years involved in his three passions – the Psychologists Protection Society, helping to start up new credit unions in Scotland and adding to his beloved collection of books, which puts many many public libraries to shame!

Sandy is survived by his wife Marlyn, sons Ewan and Alasdair and grandson Matthew